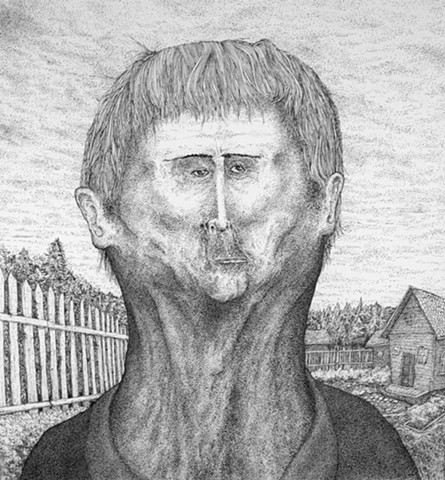 In the lead-up to my first solo show in 2010 (at Stumptown Division, in Portland), I had ramped up my production and had made the leap to larger pieces. The week before I hung the show, I decided to crank out one more larger piece, concurrent with me reading one of my favorite books, "The Brothers Karamazov" by Dostoevsky. i decided to depict a character from the book--and Smerdyakov it ended up being. There was not much physical description to go on, so I just interpreted. There's only so much work one can do in a week's time, but it was good enough for the show. A few months later I had moved to Boulder, CO and decided to "finish" it. The original had an interesting minimalism to it, but continuing withI this piece allowed me time to refine the style of my larger pieces without feeling under pressure for time--and gave me my first opportunity to put away a large pen-and-ink for later completion.