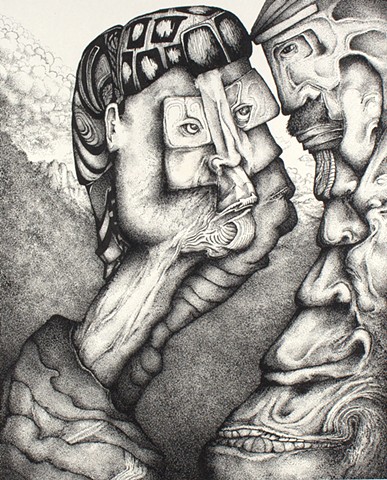 Statement Dan Groth creates visionary, dream-like tableaus of mystery and subtle humor which explore the contrast between microcosm and macrocosm, the passage of time, and inner narrative. The result is what could be an illustration of dream, or a very strange book. Dan often explores the tension between the minute and the grand using small components to construct a larger piece of art, much like a small rock makes up one part of a massive boulder field. His repertoire encompasses pen-and-ink, watercolor, collage, print-making, and more. He is constantly threatening to return to his roots as an avant-garde cartoonist. Be sure to visit Dan Groth's Instagram Page for updates and sketches. He is also represented at Studio & in downtown Durango.

The Bio Dan Groth was born and raised within the vicinity of Boulder/Longmont, CO, and went to Luther College in Decorah, IA, where he studied archaeology and minored in art. After graduating with a B.A. In 1998, he touched down in Durango, CO—his off-and-on home for most of his years—with the notable exception of a 6-year stint in Portland, OR (2004-10). He came to choose visual art as a vocation relatively late in life, (at 34 years old), but his increasing commitment to his practice has led to a more fully realized sense of purpose in his life's journey. He continues to explore the creative path through, music, writing, and performance/acting, all of which mutually enrich his expressive trajectory.