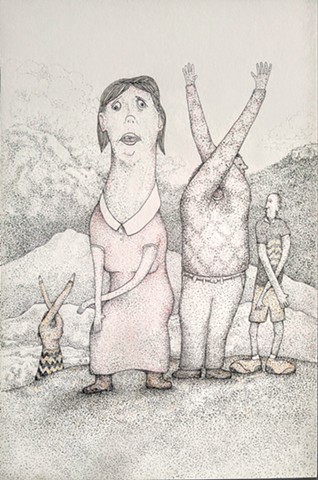 Based on one of the most powerful dreams in my life; from 1995, when I was 19. In real life, my father had died earlier in the year--and in the dream, the sound of his voice had caused me to collapse and be unable to fully open my eyes. At the end, a hotshot know-it-all doctor of sorts was able to help me stand up partly and achieve some sense of immediacy--but only by having my arms crossed--like where left was right, and right was left in my perceptions. It felt like I was so close to being healed, but because the perceptions were reversed it was as far as possible from true healing. Here, the subjects are existing in that semi-healed state, but trapped in it. The woman in front seems to be the only one who truly grasps this trouble state. The richness of colored ink I utilized in the process was enhanced by various mixtures of yellow, red, green and blue inks.