A book cover to a short story. Please read the story below. 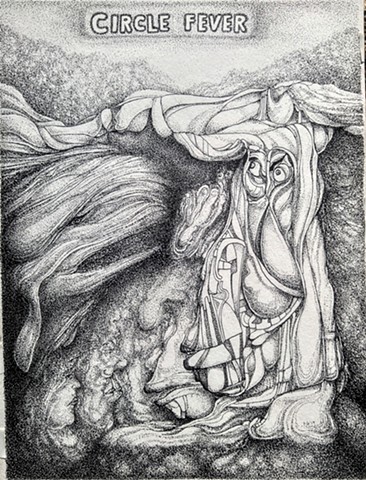 One evening a few years back, during the period when I was living in a tiny apartment with an awful landlord, I went to a party I’d been invited to at a house where a room was going to open up. Unfortunately, it consisted of people mostly just outside my main social cohort, who had a pretty tight-knit milieu of their own. However, I was pleasantly surprised to encounter a particular woman there. She was a seasonal field biologist who I had only recently met but had immediately become fond of. I had continually hoped to run into her somehow, and here she was. And as luck would have it, I ended up lying down next to her in a rather unlikely scenario. She was just to my left, our legs touching within a circle of about 25 people. The party-goers were laid out on the floor with our feet facing inward and touching, like human spokes radiating outward. Not sure how we ended up in that configuration, but it had an air of organized spontaneity. In hindsight, I’m sure it was the invention of one of the residents, who I’ve since found out is always going to New Age retreats. Our calves and ankles touched, transmitting energy continually around the circle--or that’s how it was supposed to work out. We were in the living-room, arranged in front of a TV that was covered up with a blanket.

Laying down, relaxing into the circle, I had an amusing idea that someone would turn on some bad yoga music, to create a “spiritual” sort of atmosphere. However, I mostly had the woman to the left in mind and wasn’t quite relaxed. I guess I was a bit detached from the communal nature of the gathering, but sensed an impending exchange of touch, a meaningful physical connection with the one I sought after. It was nerve-wracking, and some soothing New Age music would’ve probably helped things out in that regard.

As we settled in, I found myself attempting to relate a bizarre but vivid ancedote to her--something I had maybe seen on a nature program. I described a beached sperm whale with its mouth filled with sand; people were using large pushbrooms to continually keep its breathing passages clear. The animal would periodically let out a beastly, pained groan, “really different from the sing-song of a humpback whale”, I said pedantically. Of course, since this was a beached whale I didn’t address how a humpback whale might sound like out of water, (or whether it would even make a noise), and at some point I became uncertain as to the reliability of my anecdote and where it had actually come from. Maybe the New Age music in my mind included the sing-song of a humpback whale, triggering me to recall this whale tale. I lay my head down and looked upward.

And then something quite unexpected and awful happened. ...a man-mouth from my right connecting lips with hers, centimeters away from my face, reeking of freshly chewed onions and pretzels. A kiss directly in front of my face, indeed right in front of my own lips, between her who I adored and the heretofore unknown man to my right whose presence I hadn’t been conscious of until that very moment when the odor of pretzel/onion breath made itself known within inches of my nose. Pungent and sulfurous with a mellow salty whiff like a seaside bakery, mixed with the usual mouth smells but not quite nauseatingly stale--very fresh, in fact. If it hadn’t had that humid warmth, the smell might have been that of actual pretzels and onions--it was exactly that freshly eaten.. To say nothing of the visual effect which had an absolutely insulting closeness, absolutely insulting. The lips I had been gazing at moments ago were now centimeters away from my own, connecting with another man’s rough lips right there--the ultimate insult..Wafting into my nose suddenly, with a visual locking of lips, not sloppy--more like a good smack of a kiss, like that of a couple who had already kissed in a sloppier way. And her and him? How could I have not noticed her attention leaping over me? This all happened in a matter of seconds, my mind jolted from the whale tale into a brand new reality--an instant paradigm shift. They quickly left the circle, with me remaining as an isolated spoke. I likewise got up and went towards the foyer to get my shoes on, leaving an incomplete wheel for the rest of the folks to rearrange themselves to make it whole again.

What a fun night. I felt grateful to see a hint of dawn on the horizon as I looked out over the city lights in a vague haze, a smattering of brightness punctuated by an isolated glow. In the entryway, a man was sitting cross-legged on a chair. He was a bit older than the rest of the crew, and had a stubbly face with an irregular dapple of gray hair--spindly legs in cargo shorts, a weather-proof jacket, a pointy nose and wavy hair. “Early mornin’ to you!” he said in a German accent. “Greetings,” said I. “My name is Willhelm” I told him my name. “What a beautiful time to be alive,” continued Willhelm, “Life is so wonderful! Such good energy here.” “Great energy. Do you live here?” “I’m just was passing through town on a big trek from Chile to Maine...and then I don’t know where else. I live wherever I am at!” “Where’re you from?” “I’m from everywhere I go!” “Originally?” “I am from the Earth!” “I am from the Earth, too. Where we you born?” “I was born on Earth!” This was going nowhere, so I gathered my jacket and fumbled with my footwear, putting on my shoes over what turned out to be a mismatched pair of socks, neither of which were part of the pair I’d come in with. I noticed something strange in my jacket pocket--a can of sweetened condensed milk. I pulled it out and showed it to Willhelm. “Ah yes, the canned milk! Funny stuff. It was a gag gift from a prankster. I saw some guy sneaking around and putting it in people’s pockets.” “That’s a weird gag gift...what did he mean by it, I wonder? What did the guy look like?” “Ah just some guy. Guys do weird things.” “Where you headed next?” I was beginning to make my exit. “Who knows, my friend!” “Oh crap, my socks” “Crap on your socks? From earlier in the night?” “No, no….I just put on the wrong socks.”

Just then, Molly, (for that was her name) returned by herself and asked if I could join her in another room to talk. We went over and sat on a plush bench, about a foot apart, beneath an inapproriately ornate chandelier--indeed this room was unexpectedly luxurious, with red velvet-upholstered seating and two separate staircases with fancy bannisters leading upwards into one darkened stairwell, fading into a void which suggested more spaciousness than I had noticed from the outside, (Did I mention that I was curious about a possible room for rent at this house? Really, it was the only reason I went to the party in the first place).

It wasn’t actually a beach where the whale lay. It was in the sand somehow quite far inland, in the middle of a vast desert filled with tall sand dunes, bereft of vegetation except near water, dragged there as a juvenile after a sudden withdrawal of an ocean which had left it stranded. The whale grew somwhat large,and was carefully tended to by the locals, who continually wet it from river water until the rivers no longer flowed, upon which they dragged it to an oasis, an underground spring where it was kept it alive even as its mouth continually filled with blown sand that they constantly needed to brush out with creosote branches. It moaned incessantly, an ancient moan cracked with sand and aridity. The brushing was an act of love and devotion, and the remnant whale survived, if not thrived. A sperm whale it was, with the narrow mandible contrasting with the huge forehead, a bulky situation, gray with white dappling across it’s upper side, gently heaving with breath. This preposterous improbability was perpetuated through a century somehow. An unlikely situation beyond the realm of scientific likelihood, with a legendary aspect which made it a site for pilgrimage. In fact, a small city developed around the oasis, creating a regional center for commerce along with veneration. A priesthood developed surrounding the beast, and sojourners were sequestered near the whale in tents featuring ornate cetacean iconography. People would amble past the whale in long lines to view it’s sad expression, contribute to its constant moistening, and brushing out its mouth as needed. It willingly ate whatever was given it, usually goat meat ground up into bits.The whale would get a little fiesty now and then and would flail while chomping its teeth, gnashing. In such instances, a priest would bring a live goat for it to kill and chew on.

The whale veneration/maintenance continued until modern technology arrived in this desert. A deep well was dug and tapped into the aquifer which fed the oasis. Industrial-strength pumps were attached to a huge hose, resulting in much relief for the long-suffering whale as it was doused thoroughly on a 24-hour basis. Alas, the aquifer was soon drained irrevocably, leaving nothing at all for the whale, (or for the humans in the city, for that matter--indeed it was abandoned soon after the whale died). All that was left was one final long mournful groan as the people brushed its mouth out with cheap push-brooms purchased from a nearby discount store.

Hundreds of millions of years later, a vast bed of sandstone preserving milleniia of shifting winds is once again revealed to the air due to erosion and uplift. A future race discovers the bones of a tremendous leviathan, mysteriously locked within what must have been a nearly lifeless inconsolable desert, in a lens of mudstone with a long-petrified, seemingly manufactured piece of wood protruding from its mouth. A mystery to behold--one of the greatest unsolved mysteries from this ancient advanced civilization. The being who discovered this creature sat on a dune nearby and opened a satchel with food. He pulled out some oddly-shaped salty snacks made from a baked grain, along with a pungent root bulb with layers resembling the tiers of strata in this bed of sandstone which he was soon to begin excavating in earnest. He cut off a few slices of the bulb and put it in between two of the salty snacks to create a delectable appetizer. He smacked his lips and let out a satisfied groan of delight.